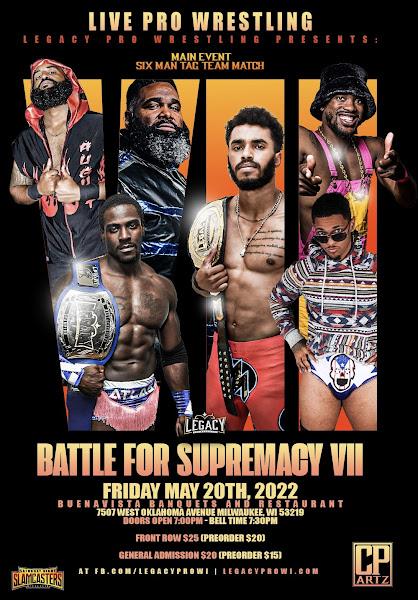 Legacy Pro Wrestling makes its return to Buenavista Banquets & Restaurant located at 7507 W Oklahoma Avenue in Milwaukee, WI for the 7th annual Battle For Supremacy on Friday, May 20th 2022!!

Doors open at 7pm and belltime is 7:30pm

After the 60 minute Iron man match between Isaiah Moore and TW3 at March Into Madness, Xavier Mustafa executed "Order 66" along with Redus Atlas and Devin August. They attacked Isaiah Moore, TW3 and Jay Manny and afterwards Mustafa introduced The Brotherhood Of Wrestling and vowed to end Isaiah Moore and his championship reign. Later on Moore, TW3, and Manny challenged The Brotherhood Of Wrestling and their challenge was accepted!

The Brotherhood Of Wrestling (Mustafa, Atlas and August) VS Isaiah Moore, TW3 and Jay Manny

Posted by Legacy Pro Wisconsin at 12:17 AM

Email ThisBlogThis!Share to TwitterShare to FacebookShare to Pinterest
Home